Remembering War - the Rose of Jericho 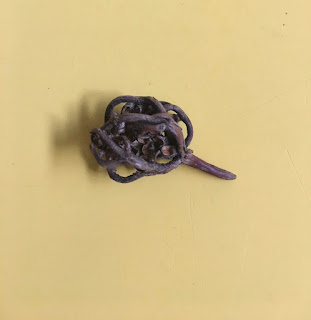 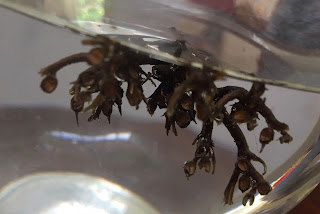 These images accompany and illustrate the following short piece:

Beside a few delicate teacups and a piece of scrimshaw, on a shelf in a glass-fronted cabinet, my mother kept a pepperpot. It was of classic Georgian shape, a tiny phallic basilica of a thing, not silver, but made from dark golden imitation wood, intricately carved with designs of multiform roses. You unscrewed the dome and put in the ground pepper; but it you unscrewed the base you found a secret compartment in which my mother kept a treasured twig. This twig was a small shrivelled claw from a bush called the Rose of Jericho, and it came from somewhere in the Middle East, a souvenir brought home to Tasmania from the First World War by an uncle.

Take the twig from its hiding-place and submerge it in water for about twenty minutes. The dried-up claw, in the water, gradually opens out, stretches tendrils, until it blossoms, resembling a freshly-picked bunch of soft brown herb. Tiny bubbles of ancient air bead the delicate branches. Then take it out of the water, let it dry, and when it is utterly shrivelled and dead, replace it in the secret compartment. Return the pepper-pot to its place in the cabinet.

The Rose of Jericho is now in my possession. I keep it in a cupboard with such things as old prayer-books and a pair of small white china hands. I removed these hands from my grandmother’s grave after vandals had trashed all the ornaments, leaving the hands behind. Whenever I take the twig from its hiding-place and let it come to life again, it's like a beloved piece of music, played over and over. It  can make me stop quite still, make me hold my breath, stare in simple amazement. And it can trigger memories long rested. Sometimes I remember to bring it to life on November 11, when many Australians remember wars, in particular the two world wars.

Posted by coco bellevue at 6:53 PM