This essay appears in New Adventures in Literature, edited by Simon Groth

So You Think You’re Going to Make and eBook

For my seventeenth birthday I got a typewriter. It was an Olivetti letter-writer, bright red. I planned to be a novelist. So in the university vacation, when I was not working in the ice-cream factory, or as a waitress, I taught myself to type. I still have the Pitman’s Business Typewriting, with its thick grey cardboard cover and lovely round blue, green and yellow typewriter keys. Today I am typing on a MacBook Pro, and between this and the Olivetti there have been many other machines. I am learning to make an ebook.

One day in 1987 I had lunch in Fitzroy with Diana Gribble, my publisher at McPhee Gribble. As we crossed busy Brunswick Street on our way back to the McPhee Gribble office, Diana said she thought it would be a good idea if I were to write a book on how to write fiction. This moment has remained with me, vivid in my memory, an illumination in heavy traffic. Diana died in 2011, and at her funeral the thought of that instant in Brunswick Street kept flashing into my mind.

This happened in the days before writing courses had come into being in Australian universities; there were no such things as writers’ centres. However there were some initiatives from state governments in the area of the arts, and I was involved in a program of manuscript assessment. I was Assessor Number Eight. I was anonymous and so were the writers whose work I assessed. I had been writing letters to the authors – yes, I typed them out and put them in the mail. I wonder now which designs were on the postage stamps. The letters went to people I referred to as ‘Dear Writer’. I kept copies of these letters – possibly some of them still exist in my files – and I realised I already had the core of my book on writing.

So in 1988 Dear Writer was published. I licensed it to McPhee Gribble which in 1989 became an imprint of Penguin. The book was published by Virago in London. By the time the licence came up for renewal in 1995 my publisher was Random House and so I licensed it to them, and wrote a revised version of the text. Between the end of the Penguin licence and the beginning of the Random one, I had a request from a university for fifty copies. There were not fifty copies in existence so I printed a limited edition of a hundred copies in a plain cover with Wild and Woolley, a Sydney publisher who specialized in producing small fast print runs. In 2010 Random decided not to renew the licence and the book went out of print. Since then I have had many requests from universities for copies of Dear Writer. It occurred to me that perhaps the time had come to see it as an ebook.

The file of the proofs from Random House (which was soon to merge with Penguin) had not survived the various transfers from one computer to another. I realised I would first need to scan the text. It so happened that I had only one copy in my possession. If I tore it apart for the purpose of scanning, I would end up with no copies at all. It seemed wrong not to have at least one copy of my own book. You’d think that I could find one somewhere, at least online, but no. Although there were plenty of copies in Indonesian. So I persuaded a friend to relinquish her copy in exchange for a copy of the limited Wild and Woolley edition (which uses the original, not the revised 1995 text). The process of scanning, while being perhaps elegant and astonishing, was tedious. As the book on my left shrank page by page and the pile of loose pages on my right grew, the data on my laptop lay in between the two.
When the scanned pages at last became a file, I began an exhaustive revision of the text. While the basics of writing fiction remain constant, the vast and rapid changes and developments in technology, publishing, and teaching had to be acknowledged, reflected and addressed in the new version of the book. After all, today people write novels on twitter. The notion of the letters is now quaint in its formality, but to abandon it would mean losing the tone of the book, and it was this tone that students and readers found particularly helpful and engaging. I say ‘readers’ because this is a book that can be read as a piece of fiction as well as a manual of instruction. It isn’t simply a matter of tone; Dear Writer is an enactment of its own principles. Interestingly, people frequently refer to Dear Writer as Dear Reader. I assume they feel the text speaks to them, that they, the readers, are the writer being addressed.
There are two characters: Writer and Virginia. Writer is a middle-aged woman living somewhere in rural Australia and writing short stories which she sends to Virginia for assessment. The novelist Virginia, as it happens, is a character from my novel The Bluebird Café . The readers of Dear Writer never see the script of the story under review, but must build it up in their imaginations. There are no letters from Writer. Because the characters are of their time, which was long ago in 1988, they think about the virtues of writing with pens compared with working on a typewriter, and then on a computer. I remember being resistant to the image of the old Royal typewriter on the cover of the Random House edition, because I thought it was suggesting the text was nostalgic and ossified. Yet people said they loved the image. The cover of the Virago version was never admired by anyone I ever heard of; it suggests, with its blood red woman at a typewriter, that writing fiction is something to do with menstruation.

You can see some of the problems that changes in technology have introduced to the revision and re-presentation of a book like this. Often when I see the phrase ‘changes in technology’, the image of Tess of the d’Urbervilles comes to mind; that tragic emblem of a young woman trapped in social revolution, destroyed. Writing, revising takes courage; I am brave enough to do this.

I must now switch to a present tense narrative, because as I write this essay I am still working on the revision of Dear Writer in preparation for its new appearance. I say ‘appearance’ rather than ‘publication’ because I have a sense that something dramatic and revolutionary is happening to it, and that ‘publication’ is not a term that serves the purpose.

I have considered the fact that most of the students of writing today (2013) are very young, that they use social media, that they are probably keen to by-pass traditional publishing, that traditional publishing is also morphing even I sit here at my laptop, that those young students of writing are probably writing novels with their forefingers and thumbs on their iPhones, that possibly anything Virginia might say to Writer about, say, the agreement of a verb with its subject, is not going to matter to anybody much.
Yet I know that it does matter, and that it will continue to matter. I am not talking about rigidity and inflexibility and fossilisation, but about clarity and freedom. The more you know about how language behaves, the better equipped you are to use it, the more power you have over your own thoughts and ideas. Not so long ago I was teaching a university course. At the end of the second session I asked the students what areas of writing they would like me to cover in the course. They asked me to teach them grammar. In the early nineties I taught a course at an American college where the students wrote all their work, including their journals, on computers. A group of them came to me after class and said they were going to England for a semester and would have to write their journals by hand. They asked me to teach them how to do that. I know, and not just from those examples, that the things Virginia and Writer are able to convey are still important to people learning to write fiction, and I am keen to re-fashion the book in such a way that the original flavour is preserved, while the nature of the world into which it will go continues to change.
The challenges I face are not just those presented by the current technologies, or by the changes in publishing, or the changes in hardware and software, but the changes in the whole climate and make-up of readers and students and writers themselves.
So I think I am going to make an ebook. By the time it is done, ebooks might be obsolete, might be the luxury houses built on the edge of the cliff, only to disappear beneath the waves as the level of the sea rises in the heat of the blazing sun.

Having converted the old Random House book into a Word file, I then completely revised the text, taking into account the changed landscape of writing and reading, and I was ready to meet the technology of the ebook. Ready, it turns out, but not really quite able. I had to admit that I could not do this alone, and searched for support and help. There are websites offering methods and varying levels of support, but it was clear to me that they were not going to be my thing. There are of course people who can just get in and take up the challenge of the technology – I was not one of those. I confess I had found it hard enough to do the conversion to scans and then into Word. I think I did quite well for someone who didn’t know what they were doing.
Ebook help eventually came in the form of Bronwyn Mehan who is the publisher of Spineless Wonders, a publisher dedicated to, among other things, the production of ebooks, or books without paper, books without spines. Bronwyn offered to take over the making of the ebook – but then she pointed out something I had been trying not to think: she said a book such as Dear Writer is a book that many readers and students of writing like to hold in their hand, to consult in the old-fashioned way, to use the Index for quick reference, to keep on the bookshelf. This was obviously true, because I had found it impossible to get hold of a copy of Dear Writer until a fellow writer volunteered to let me have hers. So Bronwyn’s suggestion was that before she produced the ebook, maybe she could produce the paperback. The new title would be Dear Writer Revisited.

We would proceed from the paperback version to the ebook version, the ebook requiring its own specific layout and other elements needed for electronic delivery. How to manage an index in an ebook? Such matters would impact on the text.

The ebook exists, and the hard copy of Dear Writer Revisited, published by Spineless Wonders, is in shops, in classrooms, in libraries, on the bookshelves of writers.

Posted by coco bellevue at 5:40 PM No comments:

MY INTERVIEW ON THE GARRET - STATE LIBRARY OF VICTORIA 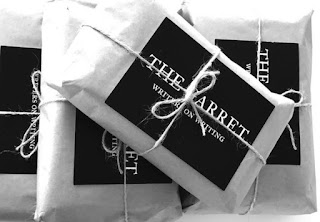