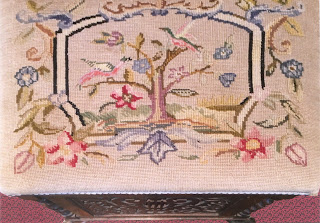 This is the text of a talk I gave at the Newcastle Writers' Festival 2017. My co-speakers on the topic of 'The Getting of Wisdom' were Dr Peter Doherty (The Beginner's Guide to Winning the Nobel Prize') and Monsignor Tony Doherty ('The Attachment'). The session was mediated by Lee Kofman ('The Dangerous Bride').

THE GETTING OF WISDOM

I am honoured to be speaking today on the ancestral lands of the Awabakal people and the Worimi people. I acknowledge the First Australians as the traditional custodians of the land and the waters. Their cultures are among the oldest living cultures in history. I pay respect to the Elders, and I extend my recognition to their descendants.

I want to show you this image. (See the picture above)

This is the tapestry on the seat of my piano stool. It’s a simple tapestry pattern for the Tree of Knowledge. Or is it the Tree of Life or the Tree of Wisdom. I won’t stop now to discuss the distinction between knowledge and wisdom – my purpose in showing you the image is to tell you a story. In 1981 I went to an auction and bought the stool. It is charming. Part of its provenance, according to the auction house, is that it was used in the movie The Getting of Wisdom. I’ve watched the movie at least three times, and most recently I watched it for the express purpose of seeing the piano stool in shot. So every time someone sat down at a piano, there I was with my finger on the pause button, waiting to get a glimpse of the stool. This did not happen. It seems that piano stools in movies disappear beneath long dresses. So it’s nice to have the provenance, but the girls might as well have been sitting on an orange crate.

However, when I sit down to play, I may be comforted to imagine that I am absorbing wisdom with my bottom.

What I have learned by this method, sitting on the piano stool playing the odd sonatina, is that science, spirituality and the arts, including fiction writing, are all concerned in one way or another with a search for meaning.
My special field is writing fiction.

One of my fictional characters bears the name Carrillo Mean, and he turns up in my work from time to time. He is a prolific writer among whose books are The Mining of Meaning and the Meaning of Mining. He also has a facebook page called The Wisdom of Carrillo Mean, but is quite lazy about posting on it. He’s a bit arrogant. So you can see that I am usually quite conscious that what I am doing when I am creating fiction is joining in the great human desire to know: Where did it all come from and where is it all going and why. Wisdom you see. The search for wisdom. But perhaps it would be wise not to ask those questions. I’m making my project, my fiction, sound rather lofty and grand. It isn’t though. But it is serious, although I can never help seeing the funny side of things, so my fiction is also funny, in a darkish kind of way. Where, you may wonder, is the wisdom in this?

The quest for meaning, the desire for wisdom, conducts itself in my head as stories. Human nature is programmed – if I can use that word – to make up stories and to respond to stories. Human beings make sense of things perhaps most easily through stories. The writer of fiction takes up the position of observer, interpreter, and ultimately teller. No matter how much you observe, how much you interpret – the important thing generally is to get the story into shape – orally or in print – and tell it to other people. Perhaps with the accumulation of all the stories in all the world, wisdom might be attained.
In one of the letters in The Attachment, Tony writes that Irish people – I think he might mean all people – value stories next after food, shelter and companionship. I’d go along with that. Great myths and fairy tales and stories from many different cultures, including religions, are storehouses of wisdom. And I think much wisdom is available in the life stories, however short and anecdotal, of other people. Listening to people is a great doorway to wisdom.
The title of this panel is taken from the Book of Proverbs 4:7 –
‘Wisdom is the principal thing; therefore get wisdom:
and with all thy getting, get understanding.’

What I love about that verse is the constant use of the uncompromising verb ‘to get’. And Henry Handel Richardson adopted it in her title for the novel about schooldays. The Getting of Wisdom – which is somewhat tongue in cheek really, as the main character only arrives at the very beginning of wisdom by the end of the story. Of course it emphasizes the importance of experience in childhood as the key to learning wisdom, and there are examples in both Tony’s and Peter’s books (The Attachment, The Beginner’s Guide to Winning the Nobel Prize) of vivid childhood memories which remain with the writers, nourishing their long search for meaning. And if wisdom comes with experience, Lee’s book
The Dangerous Bride is a very personal reflection on experience, and carries a lot of hard-won wisdom.

Lee asked me to give some indication of how wisdom is approached in my own work. Well in my manual for writers Dear Writer Revisted there is a suggestion for which I have been famous since 1988. It is that if you want to be a writer you have to give up housework. That’s probably the wisest thing I ever said. The other one – it isn’t in the book – is what I sometimes say to students in workshops – sit down shut up and write a sentence. Now write another sentence.

Then at the end of a story of mine – ‘The Woodpecker Toy Fact’ – there’s this:
The night before they buried my grandmother she came to me as I lay sleeping. She had taken by then the form of a small blue butterfly. She resembled a forget-me-not. She alighted on my quilt and smiled at me as she always smiled. And all she said was one word. She smiled at me and she said “listen”.

Another thing is that in my novel Family Skeleton there is a comment about death, at the beginning of every chapter. Such as ‘The afterlife is our true home. It needs good furniture.’ This may or may not be wise, but it’s a thing.

Anyhow, my main source of wisdom is probably the piano stool. They really should have shown it in the movie. Have another little look at it, and marvel.
Posted by coco bellevue at 5:18 PM